skip to main | skip to sidebar

We have been gone and this morning we were home and the weather was cool.  So, we picked all the good stuff out of our garden.  I could not bring myself to freeze all of it and, did I mention, the weather is cool.  So, the logical conclusion is...SOUP! 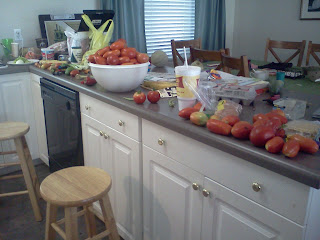 So, after looking on-line for a recipe, twice because my youngest takes great humor in closing my tabs or clicking on and opening ads.  I came across this recipe and proceeded to follow it very loosely, which for me is NEVER done with a new recipe.  But, did get great reviews from my husband.  :-)
So, after reading the recipe, I decided to start by browning my hamburger because I do not want all that grease in my finished soup which would be added if I added my raw hamburger to my veggies.
After browning the hamburger, while it was draining, I sweated my veggies.  These are the veggies at the beginning of cooking. 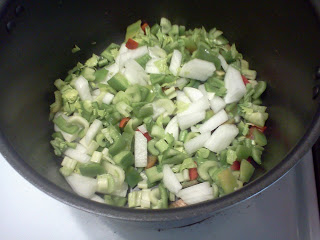 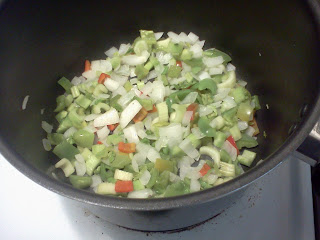 Once the veggies were tender, they looked like the picture above, I put the hamburger in. 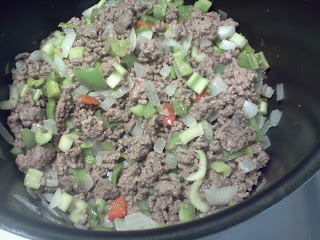 I, then, added the rice and began adding tomatoes.  I'm not really sure how much tomato is in there.  I just kept pulverizing and adding till I thought it looked good. 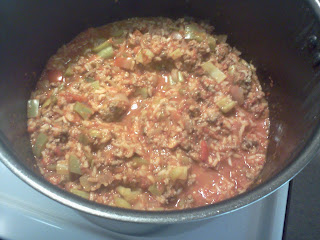 So, here is my version of the recipe...

Brown your hamburger and drain.
While your hamburger is draining, put your onion, bell pepper, celery, and fresh chopped garlic in your soup pan.  (I used some of the hamburger grease that remained in the pan to sweat my veggies.  Or, you can use a little cooking oil.)
Let veggies cook until they are soft.
Put hamburger back in the pan.
Add rice, water, tomatoes, sugar, salt, and pepper.  Put a lid on it and let it cook till the rice is tender, roughly 45 minutes.  Watch it and stir it occasionally.  If it is looking like there isn't enough liquid, add more tomatoes.
Taste the soup at this point to make sure you like it.  You can add more salt, pepper, sugar.  When it is to your liking and the rice is cooked and a good sprinkle of cinnamon.  Stir and serve.  (I served with saltines because I thought it might need a little extra salt but didn't want to risk screwing up the goodness I already had going by adding to much salt.)